There has been a lot in the news lately regarding how we generate electricity to power our lives. It has become apparent that the energy sector is pivoting away from the reliance on coal for electricity while emphasizing other power sources such as natural gas and wind. Political perspective notwithstanding, many coal-fired power plants have outlived their designed lifespans and either warrant replacement or upgrades to meet current environmental standards. When a utility company evaluates the viability of the continued operation of a coal-fired power plant, often they find alternative energy sources to be cost competitive and elect to move in that direction. Public policy has played a role in this shift, but market forces and public perception are also driving the decision to move away from coal.

Over the past 30 years, the amount of electricity produced by coal in the United States has decreased by approximately 50% – growth in natural gas and renewable-generated electricity has filled this void. Nationwide, the closure of 546 coal-fired power plant units was announced between 2010 and 2019. The two largest electric providers in Michigan, Consumers Energy and DTE Energy, have made commitments to phase-out coal-fired power plants; in particular, Consumers Energy is planning to discontinue reliance on coal by 2025.

Retiring coal-fired power plants has a positive impact on the surrounding community. Ambient air pollution remains a significant public health issue in the United States, and emissions from these plants impact regional populations. Although the power sector has reduced many of these pollutants over the past two decades, important health and environmental concerns persist (http://www.epa.gov). The impact of this air pollution often disproportionately falls on low-income communities and communities of color.

Following a utility company’s decision to close a facility, the shuttering of a coal-fired power plant occurs in three phases: decommissioning, remediation, and redevelopment. Decommissioning of a coal-fired power plant involves the removal of electrical generating equipment such as the steam turbines and raw material that remains on site such as coal. The building infrastructure is often demolished during the decommissioning process to prepare the property for redevelopment. Concurrently or following the decommissioning process, environmental remediation is also performed to support future reuse of the property. Remediation typically entails cleanup of any on-site coal ash (i.e., coal combustion residuals or CCR) storage ponds, coal storage areas, wastewater treatment ponds, and any other ancillary issues. Finally, the property is often redeveloped in support of bringing back jobs and a tax base to the community.

Examples of former coal-fired power plants that Envirologic has worked on.

Envirologic has experience partnering with private and public entities to remediate and redevelop former coal-fired power plants across the state of Michigan. Our highly trained staff also manage and oversee asbestos abatement and demolition contractors, which play a large role in the decommissioning process.

Envirologic has designed and implemented site-wide contaminant investigations for several former coal-fired power plants and subsequently managed the environmental cleanup, including storage areas for coal, coal ash, and wastewater, and remediation of petroleum-related impact. From a compliance perspective, Envirologic has also assisted power plant owners with permit management (data collection, report submittals, etc.) associated with storm water and wastewater. Beyond remediation efforts, we have also worked with public entities to secure funding to assist with redevelopment opportunities. For these projects, it is Envirologic’s goal to not only help address the environmental legacy associated with these facilities, but also to revitalize the property to provide future benefits to the community.

If you have questions about our work on these projects, please contact Project Manager Derrick Lingle by phone at (800) 272-7802 or email. 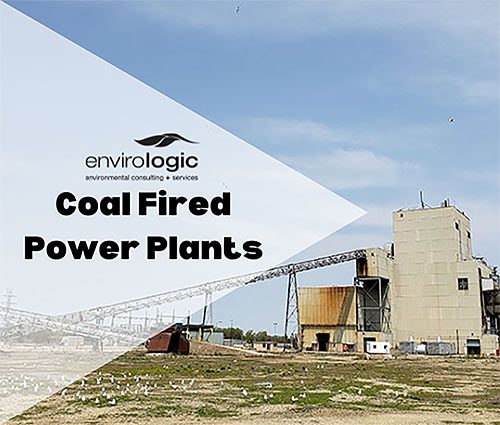