Women have always made an impact in the sciences, but we haven’t always celebrated their important discoveries, contributions, and accomplishments. During Women’s History Month, Envirologic would like to spotlight a few you may not know who have impacted the environmental and earth sciences.

Ellen Swallow Richards, born in 1842, was trained as a chemist and the first woman admitted to the Massachusetts Institute of Technology (MIT). She was accepted by MIT to “ascertain women’s abilities in the sciences.” Richards may be known as the founder of home economics, but her career also helped lay the foundation for environmental engineering. She performed an unprecedented survey in 1890 that led to the first state water-quality standards in the nation and is credited for making significant contributions to the understanding of environmental systems.

Florence Bascom, born in 1862, was the first woman hired by the U.S. Geological Survey in 1896. She was also the first woman elected to the Council of the Geological Society of America. She was a fascinating woman and often the “first” woman to attain recognition for her vast contributions to geology. Bascom was an expert in crystallography, mineralogy, and petrography. She established the Bryn Mawr Geology Department and trained a generation of young women who would ultimately succeed as professionals.

Marguerite Thomas Williams, born in 1895, was the first African American (male or female) to earn a Ph.D. in geology. Her pursuit of higher education was uncommon among women of her time, especially a woman of color born in the South. She focused her career on teaching rather than research, which is why she may not receive the recognition she deserves.

Marie Tharp was born in Michigan in 1920. She was a young geologist in a male-dominated field in the 1950s, when she designed a map that vindicated the controversial theory of plate tectonics. The field was suspicious of women who made science their life’s work, and she was often not given credit for her findings.

Mary Emilie Holmes, born in 1850, was a 19th-century American geologist and educator. She became the first woman to earn a Ph.D. in earth sciences in the U.S. from the University of Michigan and was elected a fellow of the Geological Society of America. She was also one of the cofounders of a seminary for young black women that evolved into Mary Holmes College, named in her mother’s memory.

Zelma Maine Jackson, a member of the Gullah-Geechee Nation, was one of the few black women in the geosciences in the 1970s, but she didn’t let that stop her from pursuing her dreams. After receiving her master’s degree in economic geology from the University of Washington, she turned her focus to cleaning up nuclear waste, helping decontaminate critical groundwater sources, and advocating for communities impacted by hazardous waste.

And one you probably do know, Rachel Carson, born in 1907. She was a marine biologist, ecologist, author, and conservationist who wrote Silent Spring in 1962, exposing the dangers of chemical pesticides. She received her master’s degree in zoology from Johns Hopkins University in 1932. Though the chemical industry attacked Carson, she continued to speak out for new policies to protect human health and the environment.

These women, and many others, should be celebrated for their intelligence, courage and the vital role they have played in our collective history. Their achievements were often overlooked, especially for women of color. Let’s ensure the barriers and disparities that women face continue to erode, and we acknowledge their accomplishments to achieve gender equality and inclusion. 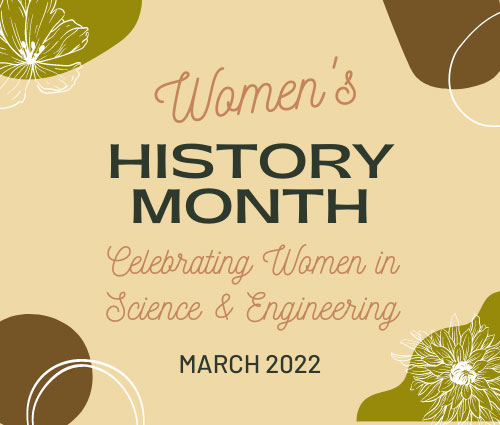