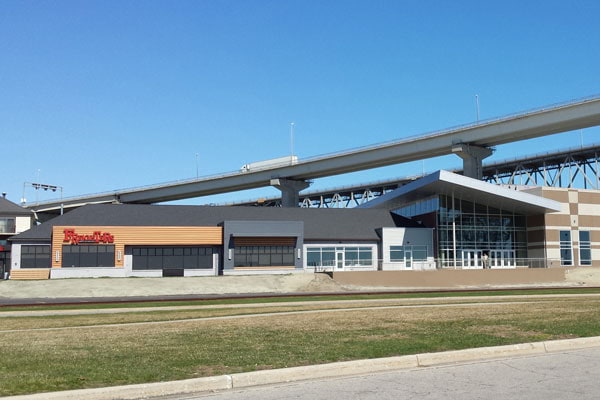 A feasibility study by the City of Port Huron and St. Clair County in 2010 identified the need for approximately 40,000 square feet of mixed-use space to host a variety of functions such as concerts, shows, exhibits, conferences, and other large events. St. Clair County, the City of Port Huron, and JB Real Estate Development LLC proposed to develop a new publicly owned convention center, privately renovate the Thomas Edison Inn, and expand and reconstruct the existing attached restaurant. In addition, Baker College planned to develop a culinary school adjacent to the hotel that would complement the development. The project is located on approximately 12.5 acres at and around 500 Thomas Edison Parkway in the City of Port Huron and is along the St. Clair River with a dominating view of the beautiful Blue Water Bridge. This visionary public/private partnership came at a time of economic uncertainty for the area and required bold leadership, investment, and support to become a reality.

The primary parcels of land upon which the development was to occur had a long history of industrial use. As early as 1858, the property was a depot and rail yard for the Grand Trunk Railroad. Shortly after 1910, Peerless Cement Corporation acquired the property, using some of the former railroad buildings to support the cement and concrete manufacturing process. The buildings were demolished in the mid-1970s, and development of the Thomas Edison Inn began in the early 1980s.

During construction of the original hotel, many of the brownfield conditions were addressed including buried debris and contaminated soil. However, contaminated soil remained distributed across the property, qualifying the site as a facility (or a brownfield). As part of the redevelopment, the functionally obsolete, 24-year-old hotel would need a complete renovation including selective demolition and extensive updates. In addition to the brownfield conditions at the site, the public infrastructure serving the property (municipal water, sanitary sewer service, and road access and connectivity to the site) would need to be significantly improved and expanded.

The public/private partnership created for this development invested over $9 million and $14 million, respectively. The funding for the project included New Market Tax Credits, a Transportation Economic Development Grant from the Michigan Department of Transportation, USDA Rural Development support, a portion of the hotel tax, a County construction bond, a U.S. EPA Brownfield Assessment Grant through the St. Clair County Brownfield Redevelopment Authority, and tax increment financing through the City of Port Huron Brownfield Redevelopment Authority, which included support from the Michigan Strategic Fund for capture of school/state tax increment.

Envirologic developed a Brownfield Plan and Act 381 Work Plan for the project, which would allow the local unit of government to capture a projected $1.1 million in taxes to fulfill a projected shortfall in funding from other sources. It is also estimated that the local taxing districts will receive more than $4.4 million in additional revenue from the construction and first 10 years of operations of the hotel/restaurant, convention center, and culinary school.

The project represented a robust private-public partnership with many entities including St. Clair County, JB Real Estate Development LLC, the City of Port Huron, St. Clair County Brownfield Redevelopment Authority, Michigan Strategic Fund, Michigan Department of Transportation, Baker College, and private developers and operating entities. As the approved consultant to the St. Clair County Brownfield Redevelopment Coalition, Envirologic helped guide the local units of government through the process of local and state government approvals necessary to put the plan into place and helped foster a spirit of cooperation between state and local governments.

With the completion of this development, the community will enjoy significant benefits for years to come through new employment opportunities, college education and vocational programs, and the creation of economic growth.