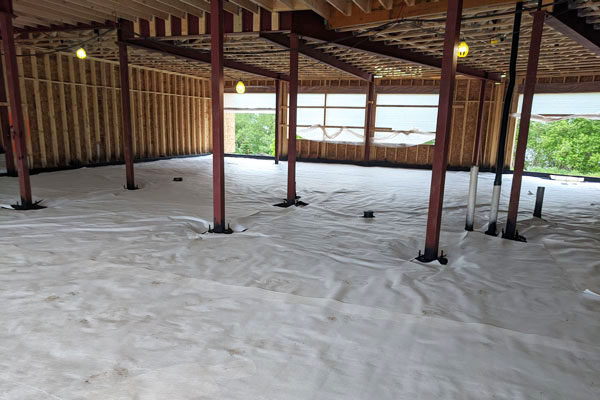 In 2002, the City of Marquette purchased 29 acres of land along the shoreline of Lake Superior, which historically operated as a rail yard from 1884 to the 1990s, collectively known as Founders Landing. The city’s goal was to support redevelopment of the vacant, blighted property to benefit the local community and increase public access to the waterfront. With the support of a Michigan Department of Environment, Great Lakes, and Energy (EGLE) Brownfield Grant, the city invested over $11 million to remove remnant rail yard materials, perform environmental remediation, install municipal utilities, and construct a road along the lakefront — all of which helped to encourage private development and better position the property for sale.

Marquette Opportunity acquired property on Founders Landing from the city in 2018 with the intention of developing a hotel (Fairfield Inn & Suites). Construction of the hotel building involved a $14 million investment with the Fairfield Inn opening in June of 2021.

Envirologic was contracted by Marquette Opportunity to perform due diligence activities in support of acquisition and redevelopment planning, which would secure liability protection for the new owner from pre-existing contamination and ensure future operations did not result in unacceptable health exposures. Previous environmental investigations had identified contamination on the site associated with operations at the former rail yard, as well as at a gas station historically located on the southern portion of the property. Solvent-based contaminants, which had emanated from a former dry cleaner on an adjacent property, were also detected in groundwater on site above state screening levels. Envirologic conducted a Phase I Environmental Site Assessment (ESA) and prepared a Baseline Environmental Assessment (BEA) on behalf of Marquette Opportunity using data from the previous environmental investigations in order to complete the property acquisition in an efficient manner.

While the new owner and operator are not liable for pre-existing contamination on the property after completing the Phase I ESA and BEA, there are still due care obligations which include preventing unacceptable exposures to contamination and ensuring pre-existing contaminant conditions are not exacerbated. Envirologic prepared due care documentation detailing the contaminant conditions relative to the future site use as a hotel.

Envirologic utilized the city’s Brownfield Plan to allow Marquette Opportunity to be reimbursed for eligible brownfield activities through the capture of tax increment revenue generated by construction of the hotel. An Act 381 Work Plan was prepared by Envirologic and approved by EGLE to allow the additional use of school tax capture increment in support of the reimbursement of select developer eligible activities. The activities eligible for reimbursement through the Brownfield Plan include environmental activities, such as the design and installation of the vapor intrusion mitigation system, as well as non-environmental activities associated with the hotel construction that are necessary to address the geotechnical conditions on site.

Fairfield Inn at Founders Landing is an example of the success that can be realized on idled/contaminated properties through the thoughtful integration of multiple due diligence and property redevelopment planning tools.