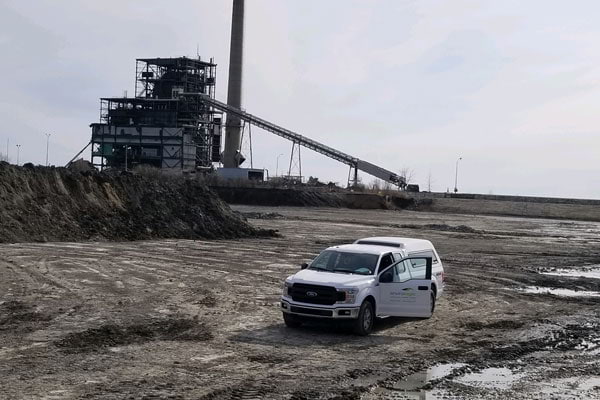 In 2018, Envirologic was retained by Commercial Liability Partners, LLC (CLP), the purchaser of the former Harbor Beach Power Plant. CLP is a leading North American redevelopment firm specializing in the acquisition of contaminated industrial sites and their associated environmental liabilities. The Harbor Beach Power Plant property consists of approximately 95 acres and is situated along Lake Huron; the facility itself was set on a manmade peninsula surrounded by the lake on its north, east, and south sides. Originally owned and operated by DTE Energy, the power plant began operations in 1968 and had the capacity to generate up to 125 MW of power.

After the power plant was decommissioned, assessment of the site revealed the presence of contaminants (primarily metals) in soil and groundwater at concentrations that exceeded Michigan cleanup criteria. This contamination represented a roadblock to future development. Envirologic’s role was to help CLP remove this deterrent by securing a No Further Action (NFA) determination for the property from the Michigan Department of Environment, Great Lakes, and Energy (EGLE). An NFA determination verifies that a property has been investigated by an environmental professional and that it is not a threat to human health or the environment.

As of July 2020, CLP has demolished the majority of the structures on site. After securing an NFA determination for the power plant, CLP plans to sell the property to a commercial developer.

Envirologic initially reviewed the existing Phase I and Phase II Environmental Site Assessment to determine which regulatory processes needed to be performed to secure an NFA determination. It was concluded that before closure could occur, several areas of the facility required additional remedial investigation and environmental cleanup.

Envirologic prepared a Response Activity Plan on behalf of CLP and submitted it for approval to the property owner (DTE) and EGLE. The plan included an evaluation of applicable exposure pathways, Envirologic’s proposed sampling approach, and remedial plans for the select areas of concern at the facility. In conjunction with the Response Activity Plan, Envirologic also developed an Ash Removal Plan that detailed removal activities for a coal ash pond west of the power plant; the pond historically covered 18.9 acres and held approximately 350,000 cubic yards of coal ash.

After receiving approval from EGLE for the proposed remedial investigation, Envirologic installed several soil borings and monitoring wells across the Harbor Beach Power Plant property for the purpose of site characterization and to assist remediation activities. Data from these sampling locations helped Envirologic define the vertical and lateral extent of the previously identified contamination and provided additional delineation of the coal ash before its removal. Envirologic also sampled existing wells to address concerns by EGLE regarding the historical use of per- and polyfluoroalkyl substances (PFAS).

After CLP purchased the former Harbor Beach Power Plant in 2019, Envirologic updated the associated environmental plans and permits for the property and transferred them from the former owner to CLP. This documentation included a Storm Water Pollution Prevention Plan (SWPP) and a National Pollutant Discharge Elimination System (NPDES) permit for the collection, treatment, and discharge of storm water at the former power plant.

In May 2020, Envirologic performed a High Water Level Vulnerability Analysis to identify whether the high water levels in the Great Lakes would have any potential impacts on the facility and whether the facility could continue to meet the requirements of its NPDES Permit.

The remaining coal ash is actively being removed and is expected to be completely removed by fall of 2020. Envirologic is conducting periodic site inspections during these removal activities to ensure the pond is properly decontaminated in accordance with the Ash Removal Plan.