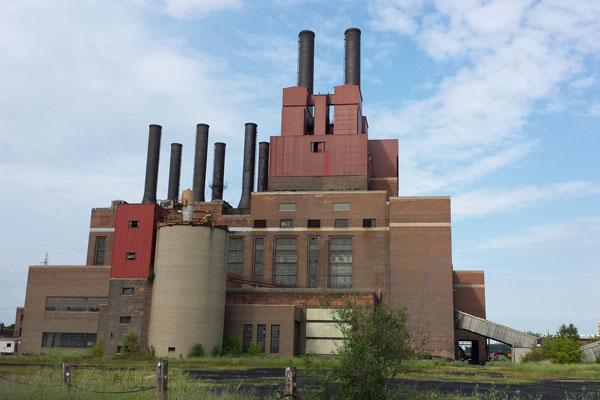 Envirologic was retained in 2014 by Commercial Development Company, Inc. (CDC), the purchaser of the former DTE Marysville Power Plant, which was slated for demolition and redevelopment. CDC is a leading North American redevelopment firm specializing in the acquisition of contaminated industrial sites and their associated environmental liabilities. Envirologic’s role was to represent their environmental interest in the acquisition of the decommissioned DTE power plant and the associated Greenwood Oil Terminal in Marysville, Michigan. Built in the 1920s, the 30-acre power plant complex was prime real estate for revitalization. This waterfront real estate sat empty until the plant was finally decommissioned in 2011 and available for sale. The 40-acre oil storage and distribution facility was constructed in the late 1970s and was supported by a deep water port located at the power plant.

Envirologic’s initial role was to evaluate site characterization data that had been identified through divestiture due diligence and, from that information, develop a comprehensive remedial investigation and action plan acceptable to the seller, DTE Energy, which was a condition of the sale. Envirologic presented the remedial investigation and action plan to DTE, who accepted it, thereby facilitating the final acquisition of the property.

After the closing of the sale, Envirologic implemented the remedial investigation portion of the plan at both facilities. The remedial action plan called for extensive investigation of both sites so that all areas of contamination could be defined and remedial actions identified. Envirologic assisted CDC with the implementation of remedial actions and report preparation in order to obtain No Further Action (NFA) status from the Michigan Department of Environment, Great Lakes, and Energy (EGLE). Since the investigation began in July 2014, four NFAs have been submitted to EGLE and non-residential closures were approved.

On behalf of CDC, Envirologic applied for and received funding from an EPA Brownfields Assessment Grant that had been awarded to the St. Clair County Brownfield Redevelopment Authority. These grant dollars helped fund assessment and remedial planning, allowing CDC to begin site investigation immediately and in accordance with the limited timeframe established in the purchase agreement with DTE.

The investigation of both sites encompassed numerous routes for contaminants to travel, which posed complex environmental challenges. The power plant sits along a major Great Lakes waterway, the St. Clair River, with one of its property boundaries juxtaposed to the river. A creek also traverses the property in two locations and empties into the river. When the plant was constructed, the banks of the river had to be built up to support the power plant’s infrastructure which includes a deep water port. Historic photographs document that the river banks were filled with unknown industrial debris and materials brought in from surrounding industries operating in the area. These materials posed a potential risk to the river. Other infrastructure presented additional concerns, such as coal and coal ash storage, leaking underground storage tanks, ash slurry disposal, and oily waste basins.

The Greenwood Oil Terminal storage facility, which has over 15 million gallons of aboveground storage, sits on top of the former coal and coal ash storage area for the power plant. The creek extends onto the property and cuts through the former coal and coal ash storage areas. The oil storage terminal was constructed in the late 1970s and early 1980s. It received oil from ships off-loading at the deep water port located at the power plant. The oil was stored and eventually piped to another power plant 20 miles north. The oil storage infrastructure combined with the previous storage of coal and coal ash created a unique combination of contaminants in an environment not conducive to remediation.

Envirologic conducted a multimedia investigation encompassing numerous potential exposure pathways including but not limited to contaminated groundwater discharging to surface water, drinking water, vapor intrusion, and direct contact. The investigation comprised the advancement and installation of numerous soil borings, groundwater monitoring wells, and creek pore water screens and piezometers from which soil, groundwater, and pore water samples were collected and analyzed for myriad contaminants. From these data, Envirologic prepared conceptual site models of both sites that presented complete and potential contaminant exposure pathways, in addition to recommendations for controlling and/or eliminating the exposure pathways through remedial action and/or administrative and engineering controls.