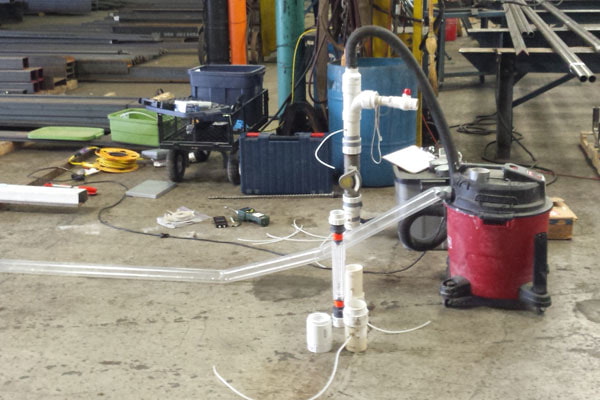 The facility originally served as a solvent distribution warehouse and later operated as a Resource Conservation and Recovery Act (RCRA) treatment and storage facility from the 1960s to 2014. Historical operations included storage and distribution of halogenated solvents, as well as solvent reclamation services. Through previous site investigations, it was determined that historic operations had resulted in the release of solvents on site above state regulatory levels.

After operations at the facility ceased, Envirologic’s client purchased the property and all its associated environmental liabilities as part of a larger property/liability transaction for several sites across the United States. Although impact at the vacant facility was previously known, during additional investigation by Envirologic, elevated concentrations of solvent-related contaminants were identified in sub-slab soil gas and indoor air samples collected from two off-site industrial buildings. Given the proximity to nearby residential properties, Envirologic conducted further soil gas and indoor air sampling in an expedited manner to ensure the safety of nearby residents.

Envirologic has assisted the client at this site in several facets, in part through traditional means of contaminant delineation via the collection of groundwater and soil samples at the facility and several off-site properties. This effort has been complicated by the rich industrial history of the surrounding area, which warranted an extensive review of environmental documents for off-site properties to identify multiple sources of impact unrelated to the facility. The client and Envirologic are currently working with the Michigan Department of Environment, Great Lakes, and Energy (EGLE) to ensure that the extent of impact emanating from the site is adequately characterized and that appropriate corrective action measures are taken.

A large component to the environmental investigation has been to assess and mitigate exposure risk via the vapor intrusion pathway on properties that surround the vacant facility. During this investigation, Envirologic collected numerous soil gas and indoor air samples from 10 industrial and residential properties while coordinating efforts with several property owners and personnel from the City of Detroit and State of Michigan.

Fortunately, impact associated with the facility was found to not pose an exposure risk to the residences that were investigated. However, elevated concentrations of solvent-related contaminants were identified in two of the off-site industrial buildings. Envirologic conducted pressure field extension (PFE) testing at both buildings; the resulting data was used by our team to design vapor mitigation systems that ensured sufficient vacuum across each of the over 50,000-square-foot areas. Envirologic also assisted with modifying and balancing both systems to run at peak performance. The mitigation systems are currently operational, and the concentration of solvent-related contaminants in sub-slab soil gas and indoor air has decreased significantly in both buildings. The client is currently in a phase of routine monitoring.