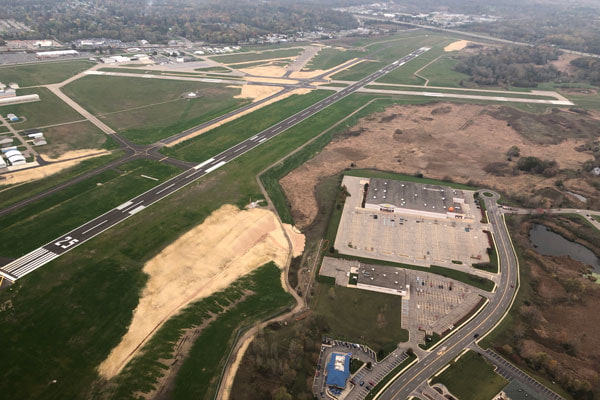 The removal of 200,000 cubic yards of waste material to realign and extend a runway was a long, complicated project. The airport project started in 2001, when the Airport Layout Plan, an official blueprint of current and future runway and taxiway configurations, was approved by MDOT-Aeronautics, the FAA, and Airport officials. The plan addressed the existing runway-end safety area deficiencies. The safety area is required to allow aircrafts a safe recovery area should they leave the paved runway surface.

In 2008, the first runway project was completed. The second phase of the project required the primary runway to provide 1,000 feet of safety area at each end to be FAA compliant. To accommodate the standards, the primary runway needed to be demolished and realigned, partly over an area that had been used as a sanitary landfill (EGLE Part 201 site) from the 1940s until the early 1970s. This $20 million construction project is the largest capital project in Jackson County’s history and has involved years of work by many, including Envirologic.

Envirologic joined the project team to assess and manage the contaminated material in the abandoned sanitary landfill. The material in the landfill was primarily residential refuse from household waste collection. The intent of our investigation was to define the boundaries of the landfill material beneath the proposed runway and its accessory structures, estimate the amount of material that needed to be removed, and characterize the waste material to determine proper disposal. With that project scope and after five years of planning, we completed the removal project in early 2016.

Envirologic was brought into the project because of our many years of remediation experience in Michigan, our extensive environmental consulting and services work in Jackson County, and our ability to help secure grants and loans. In fact, initial work on the project was funded from Jackson County’s U.S. EPA Assessment Grant, which Envirologic helped to secure. David Warwick, Envirologic’s President and co-owner, was instrumental in moving this project forward. Mr. Warwick was also responsible for helping to secure the $1 million loan from the Michigan Department of Environment, Great Lakes, and Energy (EGLE), which was used to remove and transport the waste for disposal.