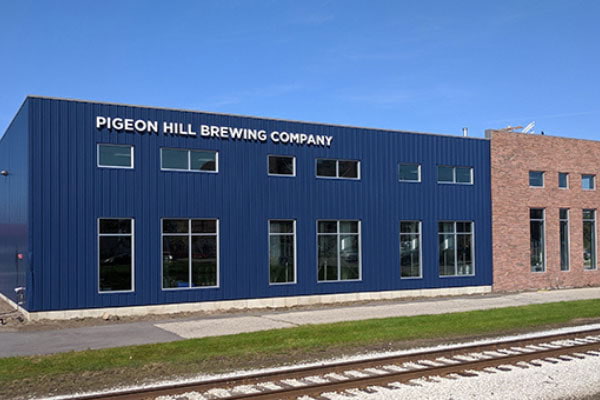 As part of a $2.5 million expansion, Pigeon Hill Brewing Company, a local microbrewery in downtown Muskegon, redeveloped a former city-owned parking lot into a 15,000-square-foot, two-story building for beer production, offices, and a designated tasting area. Pigeon Hill relocated its production operations and offices into the new facility in the spring of 2019. Its taproom will eventually also be relocated onto the property, and there are plans to add space for outdoor games and events in the years to come.

Historically, a large portion of the property was covered by Muskegon Lake. By 1938, much of the shoreline in this area was filled in primarily using foundry sand, slag, ash, and other debris. An environmental assessment of the shoreline completed in 2008 determined that environmental contamination was associated with the fill material throughout downtown Muskegon and the shoreline. This contamination from historic fill material represented a hindrance to financing the redevelopment.

Envirologic prepared a Brownfield Plan and Act 381 Work Plan, which allowed the developer to receive reimbursement for eligible activities through tax increment financing. Costs eligible for reimbursement included transport and disposal of contaminated soil, backfill for the removal of contaminated soil, associated dust control, site demolition, site preparation activities, and professional services associated with eligible activities. These additional incentives were necessary components in the finances for this project — allowing it to move forward. State and local government support was key to the Brownfield Plan’s success.

This project benefited the local community by bringing a previously publicly owned parcel back onto the tax rolls, generating tax revenues, and also by creating a destination spot that will encourage additional public traffic to Muskegon’s downtown without furthering urban sprawl.