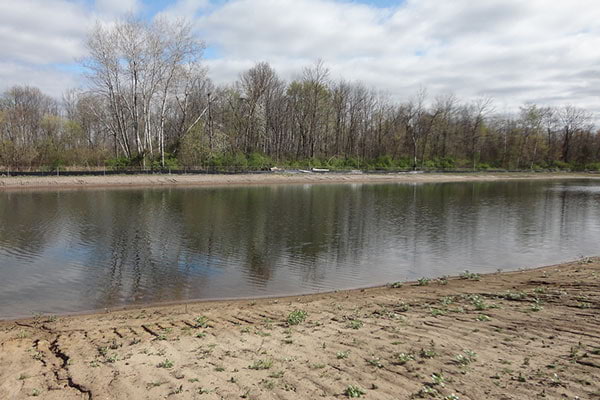 A specialty crop processing facility was making plans to install a new wastewater treatment system and implement other changes to address concerns regarding the application of wash water from the food processing plant onto agricultural fields. The existing treatment basin had been the only basin on site since the 1960s; it was used to temporarily store and aerate the wastewater before applying it on the fields. Environmental engineers determined that additional storage and treatment of the water was necessary to improve its quality by reducing the biological oxygen demand (BOD) prior to application on the fields.

Additional space for applying the treated wastewater was not readily available in the immediate area. The basin area would have to increase to approximately 9 acres to allow for two storage basins and two aeration basins. Furthermore, a considerable portion of the surrounding area available for construction of the new basins was mapped forested wetland.

Envirologic assessed approximately 15 acres determined to be the best location for the new basins. Wetlands at the site were delineated by Envirologic in accordance with State of Michigan and U.S. Army Corps of Engineers requirements. Two wetlands totaling approximately 9.1 acres were identified. All of the wetlands at the site were considered regulated due to their proximity to a creek that bordered the site. Envirologic additionally evaluated whether the area was an endangered species habitat.

Due to the size of the basins and the large volume of soil needed to build the berms to a height that allowed enough separation from the water table, a large borrow area on site was proposed. In conjunction with the engineers, who developed plans for the treatment basins, Envirologic developed a plan that minimized wetland impacts. A considerable effort was made to develop and analyze alternatives to the proposed plan in order to demonstrate that the proposal avoided impacts to waterbodies where possible and minimized the impacts to wetlands while achieving the overall goal of providing the necessary capacity for water treatment.

Envirologic prepared a permit application that combined aspects of Part 301 Inland Lakes & Streams and Part 303 Wetland Protection. The permit was issued allowing for approximately 8,000 square feet of wetland to be filled. Additionally, the permit authorized construction of two borrow areas. These borrow areas, totaling 4 acres, were excavated in upland areas of the site, and the resulting soil was used to create the berms at the new treatment basins. Envirologic developed a planting plan for the edges of the borrow ponds to stabilize soils and provide native vegetation as mitigation for the wetland habitat impacted by the treatment basin berms.