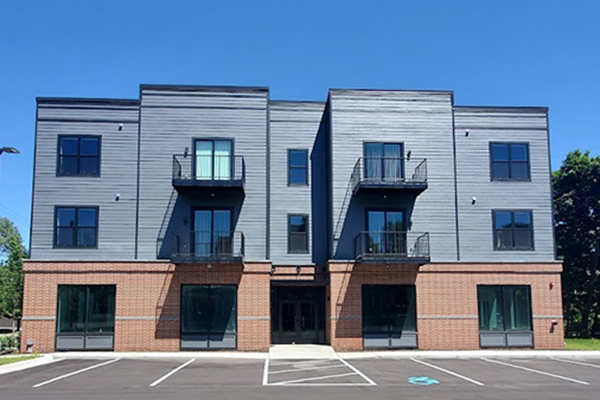 Located in a residential historic district bordering downtown Kalamazoo, this former gas station and auto body repair shop sat vacant for over 10 years. The structure had fallen into a state of disrepair and become a target for vandalism and an aesthetic nuisance to the community.

Two developers purchased the property with the intent to demolish the functionally obsolete structure and construct Westgate Commons, two identical 12,000 square foot, mixed-use buildings. The first floors of the buildings would consist of two commercial spaces for professional offices and a one-bedroom apartment compliant with the Americans with Disabilities Act. The second and third floors would each contain three one-bedroom and one two-bedroom apartments.

Due to the historical use of the site as a gas station and auto body repair shop, there were concerns regarding the potential for environmental contamination to be present, complicating future redevelopment of the property. The developers applied to the Kalamazoo County Brownfield Redevelopment Authority (KCBRA) to fund the necessary assessment activities in support of site acquisition and redevelopment.

In 2018, Envirologic performed due diligence activities for the property on behalf of the KCBRA. This included a Phase I & II Environmental Site Assessment, during which the property and structure were determined to be environmentally contaminated. A Baseline Environmental Assessment and Due Care Documentation were prepared to obtain liability protection and outline the necessary due care obligations to ensure safe use of the site in the future. As a part of the developers’ due care obligations, Envirologic oversaw site cleanup activities including removal of a contaminated soil pile, installation of a vapor mitigation system (i.e., barrier and sub-slab depressurization system) during construction of the two new buildings, and the placement of a clean soil cover in areas where no impervious surface existed. Prior to demolition of the blighted structure, Envirologic additionally conducted a Pre-Demolition Asbestos Survey and oversaw asbestos abatement.

Multiple financial tools and resources were utilized to support this redevelopment project. Initial due diligence was funded by the KCBRA’s U.S. EPA Grant. Envirologic subsequently secured and administered a $372,000 Michigan Department of Environment, Great Lakes, and Energy (EGLE) brownfield grant on behalf of the City of Kalamazoo Brownfield Redevelopment Authority. The EGLE grant was used to fund demolition of the existing building, address contaminated soil encountered during construction, and install the vapor mitigation system under the new buildings being constructed.

This redevelopment project was met with broad public support from nearby residents and businesses as it brought a blighted, underutilized property back to productive use. It additionally leveraged approximately $3.6 million in private development and is anticipated to create 18–24 permanent jobs. The $3.6 million investment is expected to make a significant increase in the taxable value of the property, resulting in an increase in the community’s tax revenues by approximately $38,250 annually.