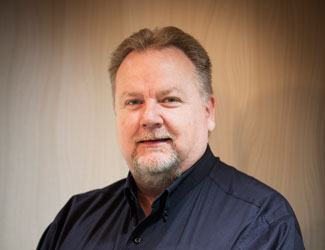 In his role as Associate Vice President, Dave’s main duties include interfacing with Envirologic’s gas utility sector clients, as well as conducting the managerial tasks associated with pipeline environmental inspections (PDF) (i.e., Soil Erosion Sedimentation Control Inspections). As one of Envirologic’s Senior Environmental Scientists with over 35 years of experience, he has designed and conducted numerous hydrogeological and geological investigations and has managed multiple large-scale, commercial projects. Dave is also Envirologic’s resident IT specialist, managing all of Envirologic’s office and field technology.

Dave and his wife, Mindy, have four sons, two of which are married and living on their own. With what little spare time he has, Dave enjoys reading. As his sons have gotten older, he has tried to read the same books as them so that they can read together. As a result, his current reading list is a mish-mash of Tom Clancy spy thrillers and young adult novels along the lines of Thirteen Reasons Why. Dave also has a deep love of astronomy. In the summer, he and his youngest son go stargazing and watch meteor showers.