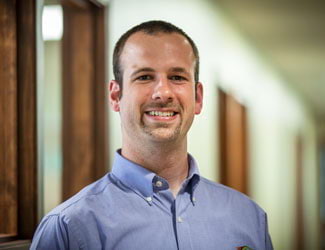 In the summer of 2013, Envirologic participated in Southwest Michigan First’s innovative MIINTERNSHIP program and brought Derrick Lingle, then a Western Michigan University graduate student, on as an intern. The experience was invaluable for Derrick, and his contribution during the internship provided a strong indicator of how well he would fit in the company. In January of 2014, he came on staff full time.

As a Project Geologist, Derrick spent much of his time focused on remedial investigations. The primary purpose of a remedial investigation is to determine the nature and extent of contamination at a site. This could involve industrial or utility sites, manufacturing facilities, or petroleum distribution facilities. This type of work combines field investigation, coordination of remedial activities, and client and regulatory reports. Derrick was promoted to Project Manager in 2017.

Derrick earned his bachelor’s degree in Environmental Geoscience from Michigan State University. He met his wife, Elise, while he was an undergraduate in Lansing, and they both moved to Kalamazoo to pursue advanced degrees at Western Michigan University in 2011. Derrick graduated with a master’s degree in Geology, and he and Elise were married in 2015. Elise now works as a Speech Pathologist at Bronson Battle Creek.

In his time outside of work, Derrick enjoys cooking, fishing, and reading mystery novels.