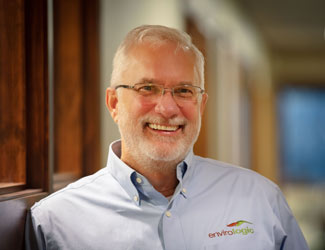 Born and raised in Western Kentucky, Paul French arrived in Michigan in 1986 after graduating from Murray State University with a bachelor’s degree in Geology. Paul started his career as a field geologist exploring reserves for a coal mining operation in southern Indiana. When the industry took a downturn, he became a draftsman for an oil and gas land company, which led him to Michigan.

When Paul joined Envirologic in 1992, things were certainly different than they are today. As the areas of regulatory oversight have dramatically increased over the years, Paul’s job has become focused on ensuring our team and clients understand the state and federal regulations concerning underground storage tanks and other types of hydrogeologic and remedial investigations. Paul serves as a Project Manager in both Envirologic’s due diligence and hydrogeological service areas, primarily assisting in projects with a significant contaminant investigation component and/or the vapor intrusion pathway.

Paul has a lengthy list of advanced technical training courses he has attended and a myriad of professional certifications. He also belongs to a number of professional organizations and sits on the Michigan Petroleum Association’s Environmental Issues Committee. With over 30 years of experience working for Envirologic and 36 years in the industry, you can be assured he has the expertise necessary to provide our clients with the highest level of competence.

In his spare time, Paul and his wife, Kim, enjoy running; in previous years, they’ve participated in the Kalamazoo Marathon Borgess Run for the Health of It! 5K run. Paul also enjoys being the DIY guy at home and recently remodeled their kitchen and relocated a laundry. He also recently took up drumming, claiming a set of drums left at home after the last of their five children left for college.