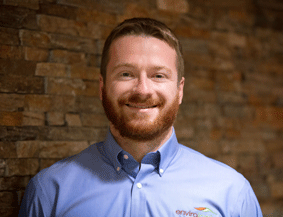 Zach Curry joined Envirologic as a Project Scientist in 2017. He holds a bachelor’s degree in Geology from Grand Valley State University. When Zach was initially brought onto Envirologic’s staff, he worked extensively in the realm of environmental due diligence, where he gained an expertise in Phase I and II Environmental Site Assessments, Baseline Environmental Assessments, and Due Care Documentation. His role has since evolved, and he now serves primarily as a member of our Environmental Investigation & Remediation Group.

Outside of work, Zach and his wife, Aly, spend most of their free time renovating their house. One of their finished home improvement projects is a trail they built for riding their ATVs that stretches around their property. Zach also enjoys other outdoor activities including hiking, hunting, rock and mineral collecting, and camping (the couple tries to take at least two camping trips per season). Zach is also part of a local Men’s Ice Hockey League.