Understanding the Potential for Residual Pesticides

Fruit orchards and vineyards are common throughout West Michigan. In fact, Michigan s fruit belt spans much of the western side of the state, stretching from the southern border to the Traverse City area. This entire region provides prime growing conditions since Lake Michigan protects the fruit trees and vines from harsh temperature changes through the creation of a microclimate; additionally, the region generally receives consistent rainfall.

A common environmental concern for sites historically utilized as orchards and vineyards is the potential for residual pesticides to be present in soil at levels which exceed criteria established for residential and nonresidential use. Pesticides such as lead arsenate were widely used on fruit orchards throughout the United States until the mid-1960s. Lead arsenate began to be utilized on orchards in the 1890s to combat destructive insects and became popular due to its effectiveness, low cost, ease of use, and persistence. Unfortunately, residual lead arsenate (and other pesticides) can persist in shallow surface soils for decades. The increased use of this pesticide led to pesticide resistance, which in turn spurred increased applications of lead arsenate.

Over the past few decades, many large-scale fruit orchard farms have been parceled off for future redevelopment. However, residual pesticides that remain on these properties can pose significant challenges to redevelopment. The persistent presence of lead arsenate in subsurface soils, for example, often exceeds health-based criteria for drinking water protection and direct contact (i.e., when skin comes into direct contact with contaminants). Soil management activities may also be necessary to characterize and potentially remove contaminated soils from the property.

Prospective owners and operators of these properties may be responsible for relevant due care obligations to protect public health and the environment and to ensure current contaminant conditions do not worsen. Examples of due care obligations include soil management (i.e., characterization of soils before being removed from the site or moving the soils to similarly contaminated areas on site), putting a cap of topsoil or pavement on site to address the potential direct contact exposure pathway, and connecting the site to a municipal water source if available.

According to the State of Michigan, not all pesticide applications are necessarily considered a “release.” If the application fertilizers and pesticides are applied according to label directions and to generally accepted agricultural and management practices at the time of the application, then the residual presence of pesticides/fertilizers would not be considered a release (Part 201 of the Natural Resources and Environmental Protection Act). In instances where pesticide applications are not identified as a release, the presence of lead and/or arsenic in soil in excess of State cleanup criteria would not represent a remedial liability. Nevertheless, there still may be a desire/benefit to addressing the potential presence of arsenic/lead in soil as part of overall redevelopment planning efforts to ensure highest value and safe reuse of the property.

Further, not all agricultural land is an environmental concern based on pesticide usage. For instance, row-crops do not typically require as many applications of pesticides as fruit orchards and vineyards, so residual contamination levels often do not exceed State cleanup criteria.

How Can Envirologic Help on Your Next Project?

Understanding the past use history and existing environmental conditions of a property is critical to a prospective buyer as they purchase property and existing owners as they manage their assets. Envirologic can investigate these potential concerns by conducting environmental due diligence, a formal process that assesses property for risk of potential environmental contamination. For former fruit orchards and vineyards, this may involve conducting shallow soil sampling to determine whether residual pesticides remain in soils at concentrations exceeding applicable health-based criteria.

Envirologic also has experience supporting the redevelopment of these sites utilizing a broad range of brownfield funding sources. Our team is dedicated to helping clients meet their redevelopment goals while managing potential exposure risks. 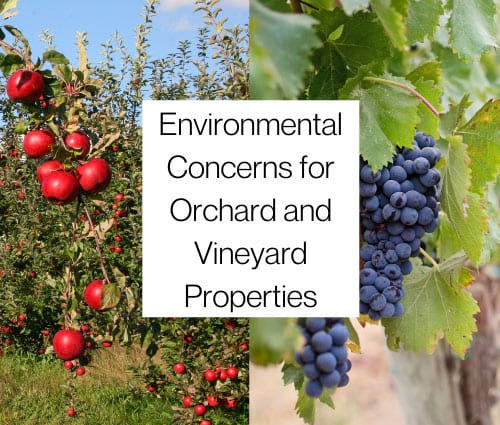