What is the Difference Between UST and LUST Closures?

In the environmental consulting business, attaining “Closure” and meeting regulatory obligations is often the ultimate goal. When it comes to underground storage tank (UST) sites, the meaning of “Closure” is different, depending on the applicable governing Michigan regulation.

Part 211 – Underground Storage Tank Regulations of the Natural Resources and Environmental Protection Act (NREPA), Public Act 451 of 1994, as amended, regulates the design, construction, installation, operation, maintenance, release reporting, and removal of UST systems. The primary regulating agency for Part 211 is the Michigan Department of Licensing and Regulatory Affairs (LARA). In general, a UST system includes a tank or series of tanks, including connected underground piping and ancillary equipment, with 10% or more of its volume beneath the surface of the ground. When a UST system is no longer in use or will be removed and replaced, the existing UST system must be “Closed.” Closure entails a 30-day notice of intent to close the UST to LARA, physical removal of the entire UST system (closure-in-place is permissible if removal would jeopardize an adjacent building structure), site assessment for the presence of a release and potential contamination, and change in tank registration. A UST system is deemed “Closed” under Part 211 when all of these requirements have been met and properly reported to LARA.

During the course of UST system closure, a release and/or indication of contamination from the UST system may be detected. If a release is confirmed based on analytical results, visual indication, and/or olfactory evidence, the release is reported to LARA as required under Part 211. The UST system can still proceed to closure under Part 211, either through removal or closure-in-place. Once reported, the confirmed “Open” release is regulated under Part 213 – Leaking Underground Storage Tanks of NREPA, and the property is considered a Leaking Underground Storage Tank (LUST) site. Part 213 LUST releases and sites are regulated by the Michigan Department of Environment, Great Lakes, and Energy (EGLE). As such, a property can simultaneously have a “Closed” UST system under Part 211 and an “Open” release and active LUST site under Part 213.

In order for a LUST release to be “Closed” under Part 213, the release must be investigated, the extent of contamination defined, exposure pathways and associated potential risks identified, corrective actions planned and implemented to mitigate those risks, and documentation incorporated into a Closure Report to demonstrate that corrective actions have reliably mitigated any potential current and future risks associated with the contamination. EGLE has the opportunity to audit and approve or deny the Closure Report and other various submittals throughout this process. A LUST release is considered “Closed” upon successful completion of all corrective actions and approval of the Closure Report. A LUST site is considered “Closed” upon successful closure of all associated LUST releases.

In summary, a UST closure is when a UST system is physically closed in accordance with Part 211. LARA regulates Part 211 and UST systems. EGLE regulates Part 213, which addresses releases resulting from a LUST. A Part 213 LUST release is closed when all potential risks associated with a confirmed release (i.e., contamination) from a UST system have been effectively mitigated, documented, and approved by EGLE; likewise, a Part 213 LUST site is considered closed when all associated LUST releases at a property have attained regulatory closure.

Written by Alisa A. Lindsay, P.E. 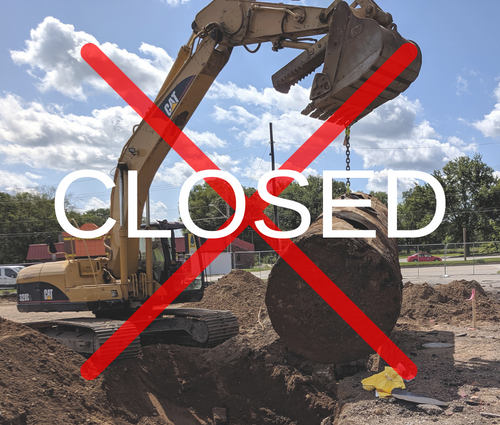